Instructions For Using The CDs 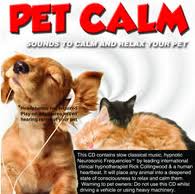 For each CD to work effectively it is as simple as playing the recording on any CD player (mono or stereo) within the hearing range of the animal according to the below specifications.

The Pet Calm CD can be used at anytime that you require an immediate response to calm any animal. It is fine and even beneficial to leave the CD playing on repeat if you have to leave the house or residence of any animal, for them to listen to when you are not there to ensure they remain calm.

The Pet Healing CD is designed to be used at anytime on a consistent daily basis when the injured animal is sleeping. This could be during the night-time when they go to bed or even during the day when they are resting. It is important to play this CD, in full, at least once a day and it is even beneficial to leave the CD on repeat of a night time. 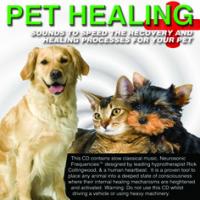 How these Recordings Work

Essentially these CDs target a more scientific approach by using sounds and frequencies designed to help animals by utilizing hypnosis techniques and other specific relaxation-inducing components not currently available in the marketplace. By dominating the animal’s noise level with the sounds from these recordings it not only ensures that they receive the calming effects from the CDs but alternatively, blocks out any other unwanted background noises which can spark anxiety or anti-behavioral reactions.

Each CD works on the following levels:

1. Neurosonic Frequencies: Special frequencies designed by Rick Collingwood: world renowned hypnotist and CD Author, designed to promote an easy and effective transition into a deepened state of relaxation and trance as experienced in hypnosis

2. Classical music played at 45 BPM to further promote the relaxation and calming process. The songs contained on this recording utilize the correct tempo, musical phraseology, instrument selection and also frequency selections to ensure your pet will instantly become calm. The predominant instruments heard on this are those contained within the lower to middle spectrum of the frequency range which is most conducive to the ‘pleasure/calm receptors’ within the majority of animals frequency ranges. It does not contain any high-pitched sounds or sudden loud noises and the recordings are highly compressed to ensure a ‘constant’ and ‘flowing’ overall feel for maximum effectiveness.

3. A constant human heartbeat sampled at a sleeping state to promote a feeling of safety and security within the animal as usually experienced whilst in the company of their owner/s.

Situations the Recordings Can Be Used:

Effects of Music on Pets and also Humans

These CDs do not contain verbal hypnosis, although the frequencies and sounds contained therein, will place the animal into a deepened state of relaxation. Whilst in such a state it has been proven in humans and animals alike, the immense positive benefits including significant improvements in stress reduction, anxiety issues, improved sleeping patterns and even physical manifestations such as helping prevent and overcome illnesses and certain afflictions are activated.

It is now commonly acknowledged that our pets suffer from the same emotional issues as humans including stress and anxiety, and the effects of these can lead to the manifestation of a wide variety of physical problems including cancers, tumors and other terminal illnesses.

With the high cost of veterinarians and other cures to help our animals once they become sick and not to mention the obvious pain and discomfort for the animal, it makes perfect sense to focus on prevention for these afflictions rather than the cure. The physical and emotional composition and traits of animals is actually quite similar to humans as proven by a multitude of scientific reports. In saying this, the healing and prevention properties of the correct choice of sounds and music, is fast becoming evident through modern science.

One such report conducted by the University of Maryland Medical Center, presented at the Scientific Sessions of the American Heart Association, on November 11, 2008, in New Orleans found a distinct relationship between sounds and blood flow in humans:

“Music, selected by study participants because it made them feel good and brought them a sense of joy, caused tissue in the inner lining of blood vessels to dilate (or expand) in order to increase blood flow. Compared to baseline, the average upper arm blood vessel diameter increased 26 percent after the joyful music phase, while listening to music that caused anxiety narrowed blood vessels by six percent.”

By taking these realizations and developing a highly specific combination of sounds contained on the CDs, pets and owners alike will experience numerous positive benefits. With particular emphasis on the “Pet Healing” CD, we have taken the research proving another distinct relationship between improving the rate and ability to activate the healing mechanisms prevalent within every animal and human whilst experiencing deepened lev

els of consciousness and deep relaxation (delta and also theta realms). Hypnotic techniques and relaxing music are commonly accepted as the most effective means to enter into such a state of mind where the body will repair itself at a heightened rate, forming the focus for the composition of this CD to actively encourage this transformation. The same principles also have the obvious added benefit that when performed correctly as on these CDs, any animal will instantly become calm.

Q: Is it OK for People to listen to the CDs?

A: It is perfectly fine but NOT if you are driving, operating heavy machinery or doing anything that for safety’s sake, requires your full undivided attention. There is a hypnotic element to the recordings which will generally make people feel deeply relaxed and a little sleepy.

A: For the Pet Calm CD simply play the CD anytime you wish for your pet to instantly become calm and relaxed. With the Pet Healing CD it is best to use the CD everyday on a consistent basis – usually when your animal is going to sleep. If at first your pet does not react to the CD, than turn up the volume a little bit. Keep repeating this process until such time that you have their attention and other background noises are blocked out.

Q: How loud do I have to play the CDs?

A: Most animals – particularly dogs and cats, have incredible hearing abilities. In saying this, the CDs can be played at a very low volume if required, however for best results, it is advisable to play the CDs at a volume that is sufficient to ‘block out’ all background noises. Part of the effectiveness of playing relaxing music for your pet is that the CDs will override any other distracting sounds

Q: What is separation anxiety, and why do our pets experience it?

A: Pets with separation anxiety exhibit behavioral problems when they’re left alone. Typically, they’ll have a dramatic anxiety response within a short time (20-45 minutes) after their owner’s departure. The most common manifestations of separation anxiety are:

Q: How were the CDs made?

A: We produced these recordings in a completely digital recording studio. The classical music on this CD was reproduced from original scores using emulated synthesized classical instruments to achieve a special effect. The music was further processed using a deep compression to ensure the volume of the recording is consistent throughout. All sounds were than further processed to centre each instrument around it’s optimal frequency range and eliminating all high pitched sounds and focusing the mix in the lower to middle frequency ranges. The Neurosonic Frequencies and the constant heartbeat are in the same tempo scheme, which creates a unified, slowly driven atmospheric feel to the recording for maximum effectiveness. All music is played at 45BPM, which our studies showed to be the optimum tempo for inducing deep relaxation in all animals as they generally process sounds at an increased rate than humans.

Q: Can I use this CD on any animal

A: Absolutely! The frequencies are all audible to almost any animal including Dogs, Cats, Horses, Guinea pigs, Mice etc. All animals will react the same way to the recordings and as such can be used to help any animal.

Q: What are Neurosonic Frequencies and are they safe?

A: These frequencies are a patented mix of a specially designed theta rhythm and a constant F Sharp frequency used in all of Rick Collingwood’s top selling Personal Hypnotherapy CDs. Theta frequencies are acknowledged as a perfect tool to achieve relaxation and are scientifically proven through the use of a brainwave activity frequencies in the human.

The F Sharp Frequency is an incredibly powerful entity. It is commonly accepted as the “Gateway Sound” for the opening of the mind and as such is a powerful relaxation tool for humans and animals alike.

These frequencies are completely safe for humans and animals and essentially help maintain a balance between within the brain and induce deep relaxation.

Q: Why is there a human heartbeat on the CDs?

A: Studies indicated that animals become increasingly calm when in the presence of a human heartbeat. It promotes a safe and secure feeling and as such they become deeply relaxed.